Enterprise, AL – Barry Moore, candidate for the AL-2 congressional seat, has been endorsed by the Honorary Chair for Alabama of the Trump 2020 campaign, Representative Tim Wadsworth.

Wadsworth said in a statement:

“I was there in Ladd-Peeble stadium, on that stage in 2015 when Barry Moore was the very first elected official in Alabama to endorse Donald Trump’s candidacy. I can tell you that Barry Moore was the original Trump Republican, and went on to be a Trump delegate at the Republican convention in 2016. I followed Barry as the 4th elected Official to Endorse Donald Trump.

“Barry Moore has supported our President from day one, and I’m confident that he will continue to support President Trump and his agenda when he’s elected to Congress.

“I’m also confident that Barry Moore will continue to represent our conservative Alabama values just like he did when he served in the Alabama Legislature.

Barry Moore had the following to say about Wadsworth’s endorsement:

“I appreciate the confidence in me Representative Wadsworth has shown by honoring me with his endorsement.  As he said, we were both on that stage in Mobile in 2015 to take a stand with Donald Trump. It’s been an honor and pleasure since then to work together, first to elect Donald Trump to the Presidency and then to support his agenda.

“I’m honored to have Tim Wadsworth’s endorsement, and I will do everything I can to be worthy of it when I’m serving District 2 in Congress.”

Barry Moore is a small businessman and Veteran from Enterprise, where he lives with his wife Heather. The couple has four children.  Moore has a degree in Ag Science from Auburn and served two terms in the Alabama House before voluntarily term-limiting himself. 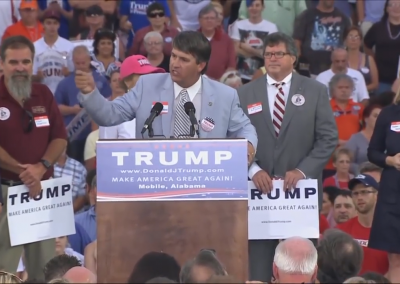